Aptuitiv Studio uses TinyMCE as the rich text editor and we recently upgraded it from version 3.2.6 to 3.3.4. For the most part the upgrade was smooth and from an end user perspective the way the editor works stayed fairly consistent. There was however one thing that was significantly different and that is the Paste as Plain Text functionality.

it would pop up a dialog box where you could then paste in the content.  In this version, however, the default behavior doesn't show that dialog box.  Instead the "Paste Text" feature gets turned on.  You would then click in the editor and paste in your content.  Admittedly it took me a minute to figure that out. The first time that you click on that button a dialog box shows that tells you that you're in "plain text" mode. By default as soon as you paste into the editor it returns to "regular paste" mode. There is a configuration setting that can make it stay in "plain text" mode.

Now, I'm not opposed to the new functionality. In a way I kind of like it better then the old. However, for anyone who is used to the previous version it can be a bit confusing. We've already got some support calls from customers complaining that the Paste as Plain Text button doesn't work. After explaining it to them they understood the concept, but it seems that the behavior of the button is not what some users would expect.

Based on the current documentation page it seemed that there was no way to get around the new functionality and bring back the dialog box. So we went on a quest to try and find an answer. Google returned nothing useful so we dived into the source code for the paste plugin. There is an undocumented configuration option called "paste_text_use_dialog" that when set to "true" will bring back the comfortable dialog box. So that's what we did and all is well again. 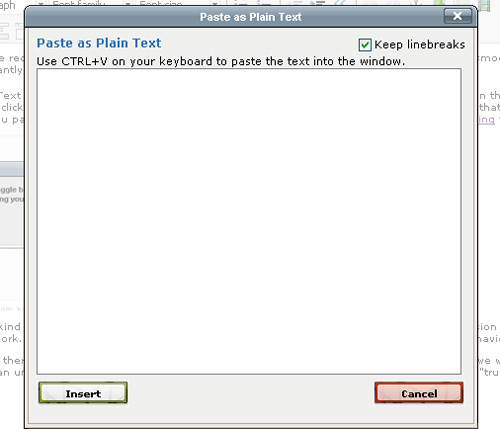