Multiple Add-on App Instances Available on Basic and Plus Versions

Before I go into what was changed I want to take a moment to explain what add-on app instances are and how they are typically used. I'll use our Blog add-on app as an example. It's fairly common for a business to want to have a blog but to also have a separate section of their website for more formal press releases. The best way to do that would be to have 2 copies of the Blog add-on (i.e. 2 blog instances).

Add-on app instances allow you to customize the URL for that instance and the name that is used in the administration. For example, in the screenshot below we've called the "news" instance of Blog "News" and it's URL is "/news".

With the click of a few buttons you can easily setup a totally fresh "install" of the Blog add-on app. 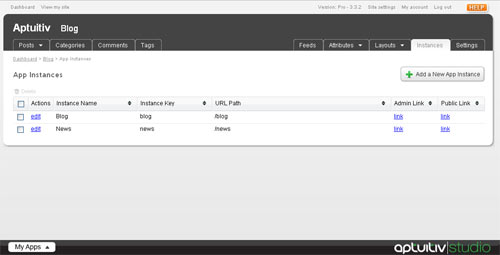 Up until today you had to be on the Pro version of Aptuitiv Studio. Well, as I said above, "not any more". Now Basic and Plus versions can have up to 2 instances of an app. Even if you only have one instance this also means that you can customize the URL and name of the app.  So if you have just one Blog but want to use it for press releases instead of blog posts you could rename it to "Press Releases" and change the URL from /blog to /press-releases.

If you are using the Pro version of Aptuitiv Studio then you can create as many app instances as you like.

To manage add-on instances you would simply go to the "Instances" section of the add-on app.

There are two small catches, but they both provide more value to the Pro version.